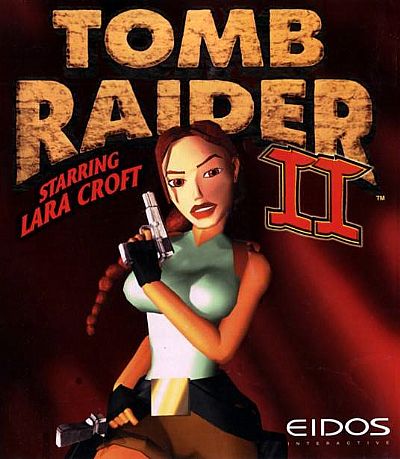 Platforms: PC, Mac and PlayStation
Synopsis: “Lara Croft returns in Tomb Raider II to discover the secret of the Dagger of Xian. The ancient Chinese believed that whoever recovered this mythical dagger would gain power beyond belief... provided they had the courage to plunge the dagger deep into their heart.
Lara's travels start at The Great Wall of China but it's not long before she's globe-trotting in hot pursuit of clues that will lead her to the ultimate goal. However she's not alone in her new adventure: this time there are other who have a seemingly fanatical interest in the dagger.
Featuring an enhanced Lara Croft, complete with costume changes, Tomb Raider II combines the classic gameplay of the original with an array of enhanced exterior settings, new moves, new weapons and a plot that'll have Lara twisting and turning around every corner.”

Tomb Raider II was released for Windows 95, Macintosh and PlayStation. There are only slight differences between the three versions and they have nothing to do with the game itself. The PlayStation version has a loading screen with a picture of the current country when loading levels. The Mac version has a loading bar in the same style font as the rest of the game text. However the PC version has no loading screens. Tomb Raider II has now been available for download for the PlayStation 3 via the PlayStation Network store. On 27 October 2011, it was released for Mac OS X and sold via the Mac App Store.

The story involves Lara Croft coming across some clues referring to a small island in the Bering Sea: a faded photograph showing an Inuit whale hunter holding what looks like an ancient Golden Mask, an old newspaper from 1945 referring to a conflict over an Alaskan gold discovery, and a secret kind of fortified military mine base. Lara is primarily interested in finding the Mask, as it is rumoured to be the famed Golden Mask of Tornarsuk, a greater spirit said to bestow powers of re-animation on the mask wearer.

Get on top of Lara's house!

Go into the practice level or training level with Lara's house. Head left at the start don't do the practice course. You need to go to the 2nd corner of Lara's House. When you get the the second corner face the wall and keep doing a 1/8 turn and then jump. Don't hold the control pad buttons and hold X while jumping. If you did it right you should then, after a couple jumps be on top of her house. Go around and explore, even do a dive off her house. (You'll die from the impact though)

When you explore the outside of the house go to the front door and open it. Walk straight in and look at the two halls on each side of the clock. You will be coming back to the righthand hall after you hit the switch I'm getting ready to tell you about.

Leave from the door you just opened and go to your left, head into the maze. Go left always in the maze unless your only option is to go right. When you get to the back of the maze you will see a brick wall, look down the hall and you will see two openings. Take the first opening to the right and fall into the hole. Then go to the end of...

Tomb Raider II received highly positive reviews from most critics. At Metacritic, which assigns a normalized rating out of 100, the game received an average score of 85 for the PlayStation version, based on 13 reviews, which indicates "favorable reviews".As one of the most hotly anticipated game of 1997, Tomb Raider II was an immediate commercial success, quickly surpassing the sales of Tomb Raider. As the first game, the game was critically successful, though not as much as its predecessor. The UK GameSpot game the PC version an 8.2/10 saying "Taking its cue from the previous game, Tomb Raider II sees Croft becoming embroiled in a brand new globe-trotting hunt for treasure. Again, levels are lushly appointed with colorful textures, taking you on a visual voyage from the waterways of Venice to eerie subterranean catacombs, this time in search of the Dagger of Xian, a relic that supposedly bestows great power upon its bearer."