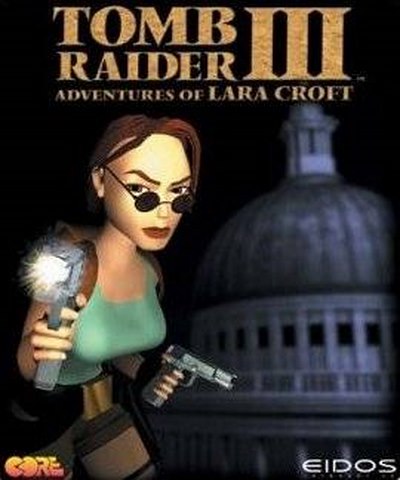 Platforms: PC, Mac and PlayStation
Synopsis:  “Thousands of years ago a meteor crashed into Antarctica and the shockwaves of its impact are being felt in the modern age. Lara Croft will follow clues leading to a deadly secret, boldly leaping chasms and blasting monsters that no one has leaped or blasted before. This time she faces a mystery that's from way out of this world. Tomb Raider III is a complex adventure that combines puzzles with high-speed action.”

The gameplay of Tomb Raider III picks up where Tomb Raider II left off. Once again, Lara's range of abilities has been expanded, now including such moves as the crouch stance, crawling, a sprinting move and the ability to "monkey swing" on overhead bars and vines. Sprinting allows Lara to gain a burst of greater speed while running. When activated by the player, a bar appears in the corner of the screen to indicate the amount of stamina Lara has left. Only sprinting depletes the bar (other activities such as climbing and jumping have no effect on it) and it quickly increases again by itself when Lara stops sprinting. When the bar is empty, she is forced back into her standard running speed. At any time during a sprint she can perform a forward roll, such as to dive under closing trapdoors.

A portion of the game still takes place underwater, but this time new perils have been added. In some levels, such as Madubu Gorge, the current of the stream will pull Lara in a fixed direction, preventing the player from being able to swim back or grab onto a ledge. She will eventually drown or be sucked into deadly rapids. These waters can only be navigated using a kayak. Additionally, some tropical pools are inhabited by a school of piranhas. Unlike alligators, these fish are invincible, and as soon as Lara enters their waters they will flock toward her, and kill her within seconds. Furthermore, the water in the Antarctic levels is too cold for Lara to swim through for more than a few seconds. She can only remain in the water for a short amount of time, and submerged under it for an even shorter amount of time. When she dives into it, a new status bar will appear in the corner of the screen to indicate her body temperature. If that bar reaches zero, Lara's life will rapidly decrease.

Quicksand is a new surface introduced in this game. Although similar in appearance to regular soil, is distinguishable from it by its slow undulating movement. Should the player fall into it, Lara may wade very slowly but will sink deeper and deeper until she is completely submerged. Like being under water when submerged, the oxygen bar will deplete, and if this reaches zero the health bar will decrease and Lara will eventually drown. The player may climb out of quicksand if next to solid ground. In the Crash Site level of the South Pacific Islands section of the game, the swamp contains hidden stepping stones that Lara can use to cross safely.

On the PlayStation version, saving the game is restricted to the amount of Save Crystals the player has stored in Lara's inventory, something of a combination of the two different save systems featured in the two previous Tomb Raider games. These floating blue crystals can be found throughout each level, but unlike the original Tomb Raider, they do not require the player to save the game at the pick-up spot. The PC version allows the player to save at any point. The developers planned on having the Save Crystal system for the PC version, but they simply weren't able to finish this feature before the end of the development cycle, so the crystals (which in the PC version are green instead of blue) act instead as instant use small medipacks in that version.

Tomb Raider III: The Lost Artefact is a mini-sequel to Tomb Raider III, sometimes unofficially called Tomb Raider III Gold. It was released exclusively for PC in 2000 and later on Mac OS in the Tomb Raider Trilogy by Aspyr. Unlike the expansion packs for the first two games, this was initially sold as a standalone product rather than as part of a re-release, and was not available for free download for existing owners.

In The Lost Artefact, Lara learns of the existence of a fifth meteorite piece called the Hand of Rathmore. She begins her investigations at the castle of Dr. Willard in the Scottish Highlands, progresses to exploring the Channel Tunnel in Dover and then ultimately ends up in the catacombs of Paris.

All weapons, medkits, flares and save crystals: