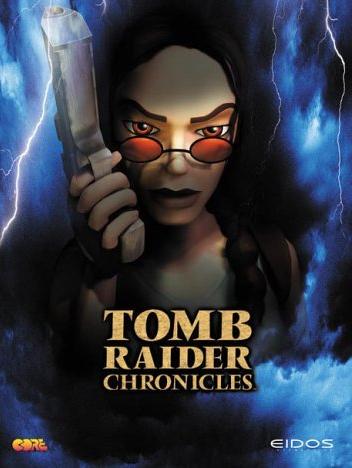 Platforms: PC, Mac, PlayStation and Dreamcast
Synopsis: "Tomb Raider: Chronicles reveals four newly discovered, and previously untold adventures, taking you on a journey from the ruins of Rome, to the bowels of a German U boat, to the rooftops of a hi-tech city in a search of four ancient artifacts. In light of Lara's recent disappearance, those closest to her gather together at the Croft Estate on a gray, rainy day for a memorial service in her honor. Afterwards, the friends sit quietly together in the study of the Croft Mansion and provide new insights about Lara's past exploits; exploits that have until now remained a secret... "

The gameplay of Tomb Raider Chronicles is closely tied to that of Tomb Raider: The Last Revelation. In terms of movement and animation, the new additions to Lara's skills are the ability to walk on a tightrope, the ability to grab and swing on horizontal barsand the ability to somersault forwards from a ledge while crouching. Focusing on Lara herself, little to no improvement has been made from the previous instalment. However, Lara does sport new clothing and gear in the form of a camouflage snow-suit and a black catsuit suitable for infiltration.

Several weapons from Tomb Raider: The Last Revelation have not returned (namely the Crossbow and the Grenade Launcher), but the MP5 submachine gun and Desert Eagle from Tomb Raider III and the revolver from The Last Revelation have returned. New equipment consists of a TMX-Timex that Lara uses to track her statistics and grappling gun, which fires a grappling hook into perishable surfaces and produces a rope from which Lara can swing. It is used to latch on certain areas of the ceiling and swing across vaults. Only one vehicle (of sorts) appears: a high-tech diving suit designed to penetrate deep waters. The ability to save wherever one desires returns from The Last Revelation as does the combining system of puzzle items used to progress in the level. Lara also uses a crowbar and a torch to progress through the virtual world.

Secrets in Tomb Raider Chronicles are represented by a golden rose (much like the dragons in Tomb Raider II). In total there are 36 scattered throughout the game and when the player has found every one of them, a new special features menu is unlocked from the Options screen.

The Level Editor came with several pre-set levels from previous installment, The Last Revelation along with textures from other Tomb Raider games. With the original package, level builders were limited only to these assets from the original The Last Revelation game. There was a second release of two more bundles that added to the range of experiences a builder could tailor, and later, a release of the moveable blocks that were missing.

Over time, however, advancements have been made to allow level builders to customise their creations. Programs exist that facilitate the creation and integration of custom content.

It received mainly mixed reviews from critics, although some reviews for Tomb Raider: Chronicles were highly positive. Games Radar gave the game a score of 88/100, saying "Excellent, albeit lacking in revolutionary intent -- but c'mon, how many games really differ in that respect?" Another positive review came from Total Video Games, who awarded the game an 80/100 rating. Even so, they did comment "Unfortunately the game will be over before you really get into it, which is a crying shame." IGN were primarily mixed, rating it a 6.5/10 and saying "Lara Croft's last adventure on PlayStation is also her very best. Still, it's just more of the same." They went on to add "If you haven't liked any of the games or got tired of the series after the 2nd, 3rd or 4th games, then there's nothing here in Chronicles that will revitalise your passion for the series or get you to like it for the first time. Tomb Raider Chronicles is basically more of the same, so you probably know better than anyone else whether or not it's something that you'll like.GameSpot were mixed, claiming "The main problem is that the Tomb Raider series hasn't grown with the times".They were particularly complimentary of the graphics and said "Regarding the PlayStation version specifically, the graphics look better than ever before. The environments in the first Tomb Raider were very sparse and bland, but over the years the developers have been able to squeeze more and more out of the PlayStation. For a game on an aging system, there's a surprising degree of detail in Tomb Raider Chronicles -without a significant sacrifice of level size."One particularly scathing review came from Electronic Gaming Monthly, who said "It should be illegal for you to own money if you even considered buying this crap."While, GamePro awarded the game a score of 3.5/5, echoing the view that Tomb Raider was somewhat in need of an update, remarking "Despite the improved graphics and imaginative story, Tomb Raider Chronicles has the same controls as previous Tomb Raider games, and they feel as antiquated as any relic Lara ever unearthed."