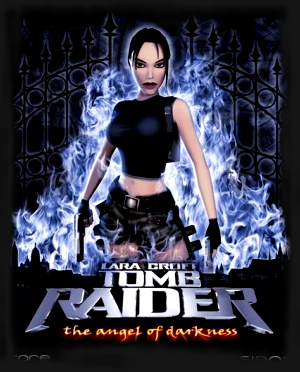 Platforms: PC, Mac and PlayStation 2
Synopsis: “A series of grisly murders brings Lara into conflict with a sinister Alchemist from the past, and a secret alliance of powerful individuals shrouded in mystery. At the center of these mysteries are the Obscura Paintings - five 14th century pieces of art that the Alchemist is desperate to repossess. Accused of the murder of her one time mentor, Werner Von Croy, Lara becomes a fugitive on the run. Pursued by the police, she follows the Alchemist into a dark world of blood, betrayal and vengeance where it is up to her to defeat this unholy alliance, and stop them from unleashing their incredible powers on the world.”

Tomb Raider: The Angel of Darkness, like previous Tomb Raider games, is a third-person action-adventure puzzle game. Players control the main series protagonistLara Croft through the majority of the game. The majority of Lara's basic moves are carried over from the previous instalment, such as walking, jumping, climbing, swinging on ropes and standard gunplay.Her new moves include a back-flip, a small hop, army-crawling, hand-to-hand combat and a "super-jump" that can be performed whilst running. Lara can also sneak up on enemies and perform stealth attacks, flatten herself against walls and peer round corners.Lara's ability to sprint, present in the three previous entries in the series, was removed.Her weapons arsenal is also modified from previous games, featuring new weapons such as a K2 Impactor stun gun and upgraded versions of weapons like the shotgun.

Unlike previous games in the series, Lara has a stamina meter which depletes whilst she is performing bouts of climbing: if the bar empties before reaching her destination, she falls. The rate at which the meter decrease slows if the player performs special actions that increase Lara's strength. These actions are also necessary to progress in many of the levels. The game incorporates elements similar to a role-playing game, whereby Lara can talk with various NPCs found throughout the environments and chose what kinds of answers to give: early in the game, these answers will directly affect her progress through the story.The game also features a second playable character, Kurtis Trent. Initially appearing to be an antagonist, the player assumes control of him late in the game. He features mainly identical moves to Lara, and his sections of the game are more based around combat. 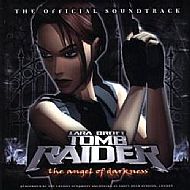 The music for Tomb Raider: Angel of Darkness was composed by Peter Connelly and Martin Iveson. The soundtrack, compared to earlier entries in the franchise, was far more orchestral. It was also one of the few areas of the game's development that did not suffer setbacks or similar problems. The score was recorded live by the London Symphony Orchestra at Abbey Road Studios, London, in 2002. It was orchestrated by Peter Wraight and conducted by David Snell. The Europe-exclusive 'Collector's Edition' of the game included eight tracks from the game's soundtrack on the bonus documentary DVD. These tracks were later release as a stand-alone Audio CD. 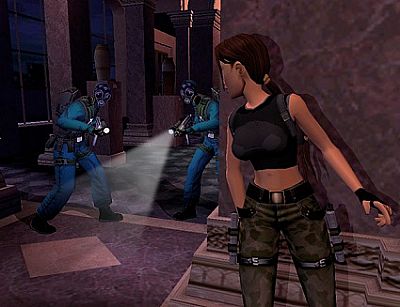 The Angel of Darkness started development three years prior to its release under the working title Tomb Raider next generation.As part of the preparation for the game, the company conducted market research, and decided to create a new setting and story for the main character.One of the main drives behind the game was fully utilizing the new platform's potential and reinventing the character of Lara Croft, including rebuilding her character model and allowing her to perform melee combat.It was the first game in the series to be made for the PlayStation 2 platform: the previous entry in the series, Tomb Raider: Chronicles, had pushed thePlayStation to its technical limits, contributing to lower review scores and sales than previous titles in the series.Core Design separated into two teams, with a new team working on Angel of Darkness and series regulars on Tomb Raider: Chronicles.After the completion of Tomb Raider: Chronicles, lead programmer Richard Morton came over and found that the new team had gone off the rails, scrapping the entire project once already and completing only the game's basic story.The developers later admitted to being overambitious. Among the concepts that needed to be cut from the game were two further locations and many gameplay elements involving Kurtis Trent.Jonell Elliott returned as the voice of Lara Croft. This would be the last time she provided the voice, with Keeley Hawes taking over for Tomb Raider: Legend.

Among the goals of the team for Angel of Darkness were to create more complicated puzzles and make the character of Lara Croft, together with the tone of the game, darker and more hard-edged. They also wished to compete with some of the newer action-adventure games on the market, which were providing heavy competition,and include gameplay ideas from Shenmue and the Metal Gear series.Many character movements were drawn from and based directly on movements made by real people, similar to later motion capture techniques, and the world design drew from various artists and elements of films from the likes of Luc Besson and David Fincher.Murti Schofield, who had previously worked with Core Design, was brought in to write the story and script. As part of writing the background for the organizations involved in the story, he researched historical secret societies and artefacts, and accurate translations of Latin text incorporated into the game. Schofield created the character of Kurtis upon a request for someone who could become the focus of a spin-off franchise.Core spent two years trying to reshape the franchise as well as writing a back story in the form of a book separated into multiple chapters, with Angel of Darkness being the first of those chapters.

The Angel of Darkness was unveiled under its official name in March 2002, with a fuller demonstration appearing at E3 that year.Problems with the game were sensed at an early stage, as Heath-Smith forgot himself and began swearing at the game while trying to demonstrate the opening level at a buyer's conference.A release date was announced for November 2002, but the game got delayed into spring 2003. Eidos believed The Angel of Darkness would benefit from additional marketing support from the long-anticipated movie sequel, The Cradle of Life, and despite another delay,the company pushed Core Design to release the game in time for the marketing support.In order to meet the deadline, areas of the game containing key narrative elements had to be cut; one of the losses was the explanation of how the character survived the events of The Last Revelation.Some of those elements were also deliberately left out by the team, who wished to bring them into future games.The team at Core Design later said that they felt Eidos forced them to get the game out before it was ready.The game was also reportedly submitted eight times to Sony before its release.The game went gold on 18 June 2003, two days before its original release date, although there was some confusion as the game had reportedly gone gold on 2 June.The game was finally released in the summer of 2003, alongside The Cradle of Life.

After the release of Tomb Raider Chronicles, Core Design's final Tomb Raider game for the original Playstation, Eidos was more than eager to produce a new installment of their action-adventure platformer franchise for the next gen consoles. Core had the story planned since 2000, at the earliest but, to the displeasure of Eidos, the production had many setbacks: the PS2's hardware was tricky for Core to handle as well and a conflict among the team in which direction they wanted to take the game. Even after more than three years of development, Angel of Darkness was still not ready. To coincide with the release of the next Tomb Raider movie, Eidos forced Core to finish the game by the Summer of 2003 as part of a marketing ploy. The final product resulted in a unfinished story with many plot holes and inconsistances caused by missing content. Although it was one of the most anticipated titles of 2003, Angel of Darkness resulted in, critically, the worst Tomb Raider installment and mediocre sales. Allegendly, the released game was only half of what Core envisioned.

-Kurtis Trent, the second playable character created for the game, would have his Chirugai Blade as a usable weapon.

Many inventory object, such as a GPS and a Cell Phone. Also included was a magical amulet that would somehow be part of the games strength building mechanic

-An animation of Lara hiding in a trash bin

-An alternative route through the first level

-Extra rooms in the Louvre Catacombs

-An explanation for how Lara survived the events of Tomb Raider: The Last Revelation.

-Putai, a North African Shaman that nursed her back to health. Putai was cut from the game yet her character bio was featured on the official website.

-A German castle level. Lara would learn there about the history of Eckhardt (tha main antagonist), as well as obtaining the Periapt Shard (a weapon needed to kill him) that mysteriously appears in her inventory halfway through the game

-A scene that explained how Lara knew Karel, right hand man of the main antagonist and the twist villain of the game.

-Possibly a scene explaining the fate of Gunderson, a mercenary leader forgotten about by the end of the game.

-Core had orignially intended for Angel of Darkness to be the start of a new trilogy of games. Due to its failure, any future Tomb Raider games from Core were cancelled. At the end of the Making Of video featured with the game, Core developers claimed that Angel of Darkness was the first few chapters of a book they wrote. It's plausible to assume that the novel is the entire story of the planned trilogy.