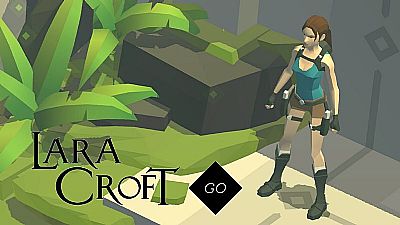 Synopsis: Lara Croft GO is a turn based puzzle-adventure set in a long-forgotten world. Explore the ruins of an ancient civilization, discover well-kept secrets and face deadly challenges as you uncover the myth of the Queen of Venom.

Lara Croft Go is a turn-based puzzle video game in the Tomb Raider franchise. Its core gameplay and control scheme is similar to its predecessor, Hitman Go. Levels are composed of interconnected nodes and lines. The player controls the series' protagonist, Lara Croft. The player and the environment take turns, in which one rests while the other moves. During the player's turn, the player swipes the touchscreen to move Croft one unit between connected nodes in the given direction. While Croft rests at the node, enemies and obstacles on the board simultaneously take a turn to simultaneously move one unit . While levels in Hitman Go were restricted to the horizontal plane, Lara Croft Go adds vertical movement with steps, cliff faces, and climbable terrain incorporated into the level design. The game contains five chapters and forty levels in total.

As the player progresses, the game's puzzles become more complex. Successive levels introduce new game mechanics and enemy types. Enemies take the form of deadly creatures such as snakes, lizards, and giant spiders. Each enemy type has a specific movement pattern. Single-use items, such as spears, can be collected on levels and then used to dispatch enemies from a distance. Other mechanics include obstacles such as boulders, saw blades, and traps to avoid. The player can activate levers, which shift walls and platforms to open paths through the level. Lara Croft Go also features optional in-app purchases, which provide hints to the puzzles.

Lara Croft Go was developed by Square Enix Montréal, a studio founded originally to develop a triple-A Hitmangame but ultimately repurposed to create mobile games for the West. All of the staff left besides technical director Antoine Routon and game director Daniel Lutz, and after a month of ideation, Lutz convinced Routon to work on a turn-based Hitman game, which became Hitman Go, and released to what the developers considered a positive response. The quick, turn-based puzzle concept itself came from a focus on short sessions while keeping the bespoke series visual aesthetic, like an "elegant board game", through many rounds of iteration. The team felt that their product distilled the franchise's elements into its simplest form.

Upon seeing the Hitman franchise successfully reduced to its core elements, the development team saw a Lara Croft Tomb Raider version as an obvious next step (or as they called it, a "go-brainer"). The team consisted of ten people (on average) who were able to work closely and nimbly, similar to an indie development team. They fit Lara Croft in the Hitman Go setting and knew to change elements like less focus on assassinating foes, less board game aesthetic, more animations, and more emphasis on environment than enemies. The team chose the classic Tomb Raider visual design over that of the series reboot, but reconstructed that series aesthetic from memory rather than from its actual design documents. They sought to recreate the moments of being chased by a giant animal or boulder. In place of time restraints, like the quick time events from the series, the developers added floors that crack with each successive turn to give a sense of time-based urgency.

The team also emphasized gameplay for the player to learn without tutorial and storytelling that did not interrupt the play experience. Compared to the previous game, the developers wanted Lara Croft Go puzzles to have fewer elements and be completely visible without scrolling, such that the player could see puzzles in their entirety and focus instead on solving for the correct sequence. The camera also follows Croft rather than remaining stationary.

The game was built in the Unity game engine, which enabled faster prototyping across multiple smartphone platforms. It was also designed first to fit on the iPhone's smaller screen—a lesson learned from Hitman Go, which was originally designed for tablets. The Square Enix team collaborated withTomb Raider brand owners Crystal Dynamics to fit the series license. The player-character outfits, in particular, were informed by this exchange.