Lara Croft & the Guardian of Light 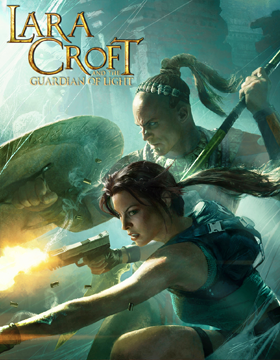 Lara Croft and the Guardian of Light is an action/adventure game featuring Lara Croft. This brand extension combines the hallmarks of the Tomb Raider franchise including exploration & discovery, platforming, and puzzle solving combined with character progression, fun fast-paced combat, and elements of human cooperation and competition. Take control of Lara and her new partner Totec, a Mayan tribesman, and uncover the ancient artifact known as the "Mirror of Smoke" in this all new action adventure game.

Unlike previous installments of the series, which were adventure games with a virtual camera viewpoint, The Guardian of Light is a non-linear "arcade-inspired" action game with a fixed isometric camera, similar to Tomb Raider: The Prophecy for Game Boy Advance. The game also features cooperative gameplay, and players can take control of either Lara or an ancient Mayan tribesman named Totec. Each playable character possesses unique weapons and skills. Like with some previous installments, Lara retains her dual pistols with infinite ammunition and a grappling hook, which she is able to use to cross gaps and which Totec can tightrope walk across. Totec carries spears which can be used both as a weapon and on the environment, for Lara to climb on. Both characters carry unlimited "bombs" that can be dropped and detonated. Tombs can be explored and some have "booby-trap puzzles" to solve. The game does not have any loading screens once a level is started.

The Guardian of Light may be played with a single player, and a second player may join at any time, whether online or locally. In the single-player campaign the only playable character is Lara; Totec cannot assist and Lara has all the tools required along with new abilities to make it through her own unique adventure. Puzzles and parts of the map are also different. Creative director Daniel Neuberger said that this was because he did not want the player to get frustrated by having to rely on AI. The campaign features eight to ten hours of gameplay.

In multiplayer, a first in the series, gameplay has an emphasis on teamwork. Lara is able to use Totec's shield as a portable platform as he holds it above his head. She may also balance on spears that Totec throws in the wall, but Totec cannot, as they are not able to hold his weight. Totec can tightrope walk using Lara's grappling rope. As the game progresses, Totec learns from Lara how to use modern weapons, such as rifles. When enemies are killed, point scores appear above their bodies—red or blue—depending on whether Lara (red) or Totec (blue) scored the kill. There are pick-ups, such as gems, scattered throughout the levels that increase the player's score. Receiving high scores in each level rewards the players with new weapons and upgrades. To add competitiveness into the game, there are a limited number of enemies and gems in the world so the players may compete to kill and grab them all. The multiplayer mode reportedly features approximately six to eight hours of gameplay, depending on teamwork.